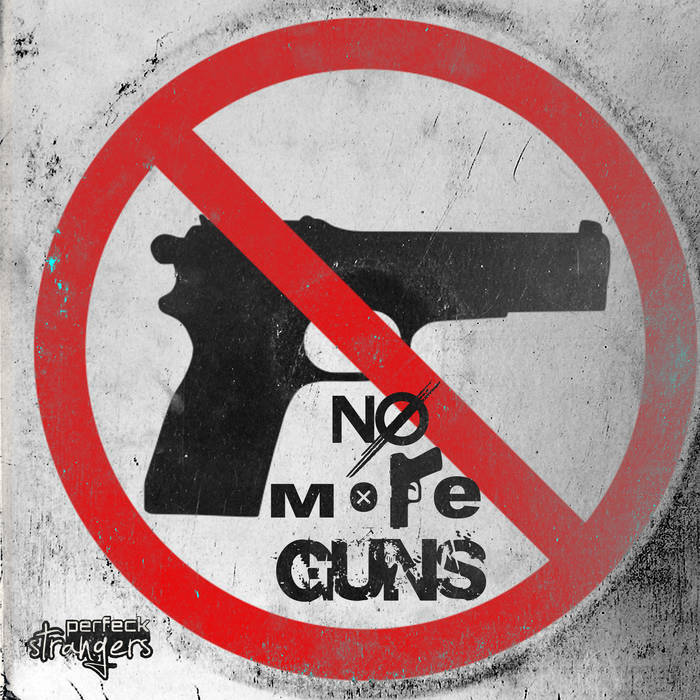 "No More Guns" is the first Perfeck Strangers single in nearly a decade. Having worked diligently as solo artists in that time, veteran Toronto emcees, Promise and Dan-e-o have reconnected to create this anti-gun violence anthem in the wake of the recent shootings taking place across the United States. Featuring Tha Crazy Guy on production, Hakeem Roze on the hook and the spoken word poetry of Quentin Vercetty, "No More Guns" is Perfeck Strangers' answer to an all-too-common crisis.

Quentin Vercetty (spoken word intro):
If I could really speak, I would tell you
That I’m sick and tired, but more tired of being sick
I’m ready to be disarmed and put into retirement
But what if I told you that I refuse to be misused by you anymore?
What if I told you that the decision to create division in your community
Or even to pick me up was not even a option anymore?
‘Cause this ain’t a “what if”, this is me telling you I’m not going to let you enslave me anymore
This is me telling you no more shooting, no more murdering or mothers crying
‘Cause this gun and every other gun is gonna start jammin’ for retirement
So in silence I’mma scream like a tyrant for no more gun violence

Promise (verse 1):
I eat powder like chowder covered in shells
I’m why so many brothers are in hell
I am the reason that his father is no longer around
But underground, I’m why his bigger brother is in jail
I’m what he had tucked behind the buckle of his belt
And pulled out when it was trouble that he felt
But if you would acknowledge what has his brother in a cell
Or what made his mother have to sell...
Herself, what got Pac? What shot Biggie?
What got hot on the block before 50?
You don’t know yet? Come on, it’s me!
Any teens trying to be OGs, they all get me
Hand in hand like handshakes
Hand to hand what man makes, I am man’s fate
The reason his mother is screaming and crying “son,
Why’d you have to die in the slums?” I am a gun

Dan-e-o (verse 2):
I can’t lie, to be honest, I prefer the touch of a woman
But for some reason these dudes are the ones who often summon
My services, my nervousness is non-existent
Though I’m the culprit in these deaths, debt is never inflicted
It’s those gripping me, it’s tripping me how they all lift me and shout
At the victims and bounce, they won’t pick if they fizzle me out
The laws barely prohibit, on funding they put limits
Like they insist that the youth need to pay prisons a visit
When I sizzle, the system makes the claim it’s racialized
The mayor don’t care, couldn’t see the truth if it faced his eyes
The youth need a place to rise, a space to guide
Them to knowledge and confidence that they all can brave the skies
But they paste the lies, the community’s treated brutally
It’s cruel to see them tainted, painted like they prone to lunacy
They usually see me in the hands of the enemy
An aggressive world that needs to die to put an end to me

Quentin Vercetty (spoken word outro):
I’ve grown tired of me, and quite frankly, I’ve grown tired of you
Missing using and abusing my capabilities
I’m tired of the hatred that has developed within today’s society
I’m tired of young boys thinking that they got that 2Pac type of “Juice” and maturity
Not realizing that posing up with an old man like me is a bad o-men in reality
See, I’m tired of living like anyone’s slave
So much so that I’m reappropriating and making up acronyms out of my name
By Going Under Negotiations to Gain Unification Now
And if every Gangster Unifies Now then we will know how
To Grow a Unified Nation Grasping U-thful Networks by Gravitating Upwards Notably
See, you don’t have to use a gun, but in a positive manner, you can be one
Yes, a G-U-N, a Gentleman U is Noble in a neighbourhood or even in a world my friend
See, if I could speak, I would tell my distant relatives to retire or go on strike
Tell that Stenna kid to take an extended trip into the garbage
Tell Ruger to stop regurgitating more calibers
Tell every Deuce Deuce to put on a hundred pounds
Tell Trigger to either hold his ground
And tell every Semi Automatic to practice meditation
Manually for 24/7, 365 days
And tell AK that even Michael Jordan saw nothing wrong with retiring
For too long for the human race we have been its pit stop
So now I’m here to pitch thoughts for no more drip drops
Of bloodshot eyes or mothers who cry for their children
See, I’m sick and tired man and I hope that you too are tired
And is willing to break the silence for no more gun violence