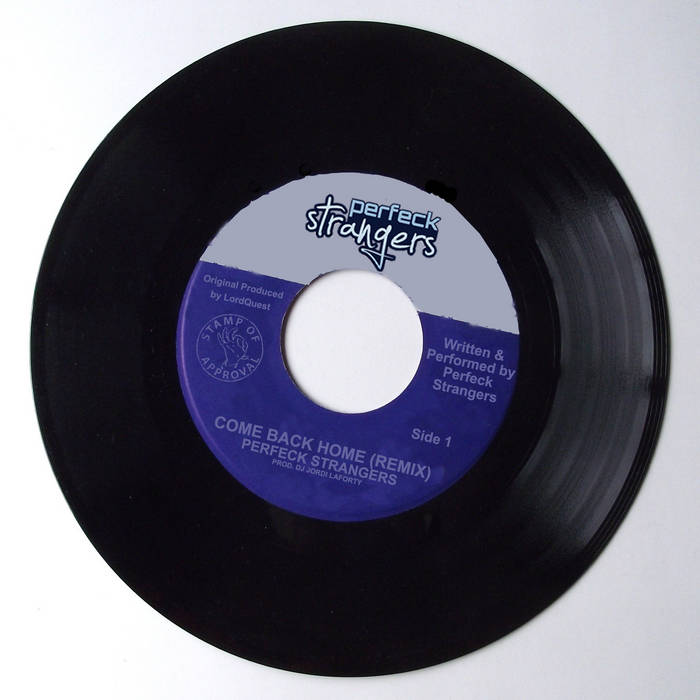 Jordi LaForty remixes and drops cuts on this Perfeck Strangers joint from the "Series Premiere" album, providing a jazzy twist to the duo's soulful quest to locate their long-lost friend: hip-hop.

PROMISE:
I used to love H.E.R. I know somebody said it before
I read it embedded in music covers
I was in debt for my credit at music stores
Though my music source wasn't what I shoulda used it for
I I love music, good old soul funk music
That bass in the trunk making it thump bump music
Because music was a worldwide language
Now music ain't heard right, it's worldwide tainted
Hip-hop crashed with me before
I think it was back in '64
'69 when Africa Bambatta became the don dada
DJ there was no one hotter in his time
Until Kool Herc came and through the first block party
Thus the breaks were made in his prime
And they were both part of the Zulu Nation
That gave birth to two new ways to make rhymes
Grandmaster Flash, Cold Crush, Rock Steady
Kurtis Blow, RUN DMC got heavy
Added sugar to the Rapper's Delight
They weren't sure about rapping on mics
Huh, they were not ready but it came and they coined it "rap music"
They gave that movement a name and joined it, now it's poison

DAN-E-O:
Huh, he used to be my bredren, I wrote a letter sent it
Hoping he'd repent with a reply that he would try and meant it
Fresher than lemon-scented Pledge and seven minty breath mints
Was hip-hop's essence back when rap was first invented
I took offence kid, reprehensible every sentence
Became your best hit's formula, abnormal intenseness
My qualm is your senseless abuse of couth you were blessed with
Your music's ancestors once fully enthused your gestures
Funk, soul, jazz, rhythm & blues infested
Reggae too was invested in tunes that were newly projected
American youth and adolescence truly connected
Unbearable proof of violence presence duly dissected
You unruly, respected no more, your duties neglected
Brutally checked into a movement that's crude and infected
To make loot is your heaven, gone is your first impression
Begging that you'll use this session now for you to learn your lesson

PROMISE/DAN-E-O:
I had to take a voyage, and it was either I come back or stay annoyed
With all these packaged up young rappers they employed
And all these little young rappers, they young boys
But they play with toys
Dude, I hate the noise but apparently you've made your choice
It's obvious you embarrassed, you've gone and changed your voice
But I've auto-tuned you out and I've assumed the route
I started on, knowing God is on my side I duel with doubt
Throwing these haymakers at these naysayers
While the biggest game players stack them papers with insane layers
It's plain, here's my request, I won't play dumb
I ain't no racist but go back where you came from
Back to the bass thump, back to the raw beats
Back to the real rhymes, back where's it's all street
Back where we'll all meet for hip-hop's return
And here's an invite to whomever it may concern