from Dreams by Perfeck Strangers 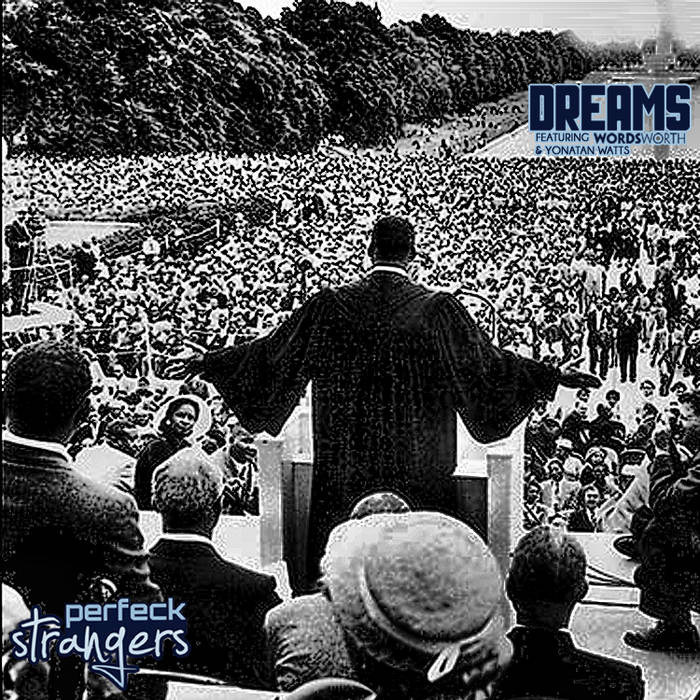 A re-imagining of the assassinations of Dr. Martin Luther King Jr. and Malcolm X as well as a declaration about one's quest to live out his dreams, "Dreams" serves as one of hip-hop's strongest celebrations of achievement in black history.

PROMISE:
Listen, I had a dream and I don't dream often But I seen Martin with a million men in the streets marching
It's new to me, it's usually me and gravity and I keep falling falling
So I'm glad to be on my feet walking Huh, the block got hot, right before I thought he woulda got shot
He dodged it, guess God wanted him to keep talking talking
He said “I had a dream, but it wasn't for me Promise
When I leave all this, I'm gonna need unique artists artists
To grab the mic, and speak knowledge
Wrap it tight, and reach targets in these markets"
I agreed, he took me under his care
Under his wing, treated me like one of his heirs
Though I promised him not a thing
'Cause I can only be me, I'm not a king
That's when I woke up, rose up to another ring
Soaked up, trying to close up, back to sleep so I can have another dream

DAN-E-O:
I had this weird perspective, my spot no one detected
The man was militant, intelligent and introspective
You could tell he commanded the crowd up from his podium
Somehow his words, before he said 'em, I felt I was knowing 'em
But I could hear somebody planning a violent assault
Something to the effect of giving his rifle a call
Can't wait 'til he stifle and fall, this will silence 'em all
Revealing his evil unknowingly to a fly on the wall
Got my back buzzing, knowing what the plot would be
Flew by the man's ear, ensuring he'd take a swat at me
At that moment, his motion made him painlessly twist
Both the man's fist and the bullet simultaneously missed
It would have been a wreck, it hit me that within a sec
An insect had just interjected to prevent a death
Woke up from the dream too early to witness the outcome
Last thing I heard was “thank God that shot missed Malcolm!”

WORDSWORTH:
My dream's now reality, means for my salary
A star in the galaxy, a fiend's a fatality
Toronto, Opera House screams from the balcony
From Brooklyn, now I'm being see out in Calgary
Had to fight fair to gain fame in the mainstream
Made my career, represent what my name means
Thought I was light years from being on the stage scene
Eighteen, had nightmares while I daydreamed
My man Sono seen greatness in me
That people would later envy, made many fake be friendly
Everyone sleepwalking but counting sheep's costing
Time, wide awake don't sleep often
When I do have my eyes shutted, I'm reminded
About the demise of brothers that has the skies flooded
It's real that dreams come true, you seeing me means I'm due
Don't let 'em take your dream from you, I had a dream